Open Hours
Each and Every 24 Hours 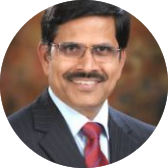 The blessed child of humble agriculturists, employed at a palm oil estate in Malaysia. Loads of patriotism brought him back to India, in 1967. Completed school education at the age of 21.

DEVELOPING LAPAROSCOPIC SURGERY – THE MOST WANTED FOR INDIAN

He became the first surgeon in South India to introduce laparoscopic surgery and instrumental for developing advanced Laparoscopic surgery in India, a revolutionary concept in surgical treatment. By being less morbid enabling faster recovery, is a boon for agriculturists or labourers

He’s the innovator for many newer laparoscopic surgical techniques including cancer and developing laparoscopic surgery as a specialty and affordable to all ,irrespective of socio economic status. He was given the Best Doctor Award by Government of Tamil Nadu for the year 2015 recognising his contribution to the field of Laparoscopic surgery. He’s also been awarded with the Dr BC Roy National award under the category of ‘Development of specialities’ namely ‘Laparoscopic Surgery’ in the year 2006.

AS A SOCIAL ACTIVIST